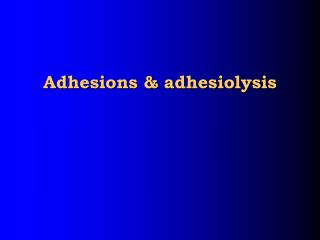 Epidural Lysis of Adhesions - Objectives. to understand the purpose and indications for epidural lysis of adhesionsto

Pelvic Adhesions - Pelvic adhesions:are considered to be post-inflammatory scar tissues that are formed after abdominal

Cell-to-Cell and Cell-to-Matrix Adhesions - . test your knowledge: where would you find the basal lamina ? proteoglycans?

Adhesions - . the inflammation and adhesions on and around the dura and spinal nerves are presumed to be the major causes

Abdominal Adhesions Symptoms Causes Treatment - Abdominal adhesions may cause volvulus. lysis of adhesions is a surgical

Adhesions - Worst Case Scenario - In a similar way, the concept of depression has been expanded to include everyone who