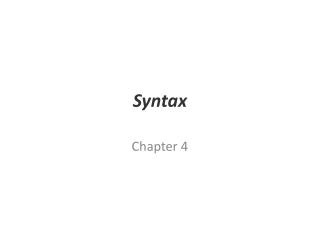 Syntax. Chapter 4. Syntax. Syntax is the study of the part of the human linguistic system that determines how sentences are put together out of words. Syntactic rules in a grammar account for the grammaticality of sentences, and the ordering of words and morphemes. Syntax. Syntax - . syntax is that branch of grammar which is concerned with the study of the arrangement of word in sentences and

Syntax - . linguistics : syntax is the study of the rules, or &quot;patterned relations&quot;, that govern the

SYNTAX - . sentence structure. the way that words are organized. . syntax = . categories of syntax: . sentences can be:

SYNTAX - . morphology was shown to deal with the internal structure of words. when words are put together to form

Syntax - . lecture 3: the subject. the basic structure of the clause. recall that our theory of structure says that all

Syntax - . lecture 7: verb positions. the mobile verb. the verb is, of course, the head of the vp and so has a position