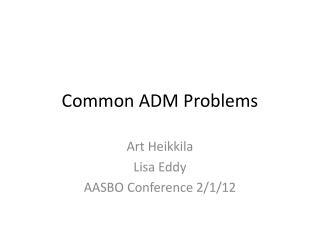 Decision problems for classes of languages - . we sometimes need to know whether a language of a given class has a given

Diabetes - . prevalence of diabetes. diabetes is one of the most common chronic diseases in school-aged children,

Definition : Ability of a user to Obtain an E-RAB from the System. - Lte accessibility problem cause &amp; solution

ADM 612 - Leadership - . lecture 23 – culture and leadership. description. no unified theory for culture and

Chapter 8 Survey Research - . introduction. survey research involves the collection of information from a sample of

What if We Really Had a Silver Bullet to Deal with Health Information ? - . 1 dec 2011, compass seminar koray atalag, md,

Skilled Trades 1201: Unit 2 - . skills common to all trades. so far thus, thus so far…. unit 1 apprenticeship and the

Reasons Behind Program Delays - . summary. program delays are common; the reasons behind the delays are varied problems