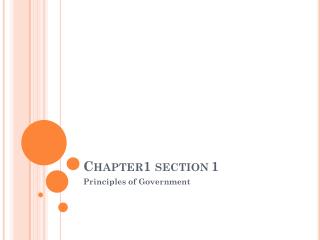 Chapter1 section 1. Principles of Government. Aristotle. A scholar in ancient Greece, was one of the first students of government. . State. nation. Any sizeable group of people who are united by common bonds of race, language, custom, tradition, and sometimes religion.

Chapter 1 Section 2: Quadratic Equations - . in this section, we will… solve quadratic equations by factoring solve

Chapter 1 We the People - . section 1: civics in our lives section 2: who are u.s. citizens? section 3: the american

Mesopotamia Chapter 1, Section 2 - . mesopotamia. means “ the land between the rivers ” a land that lies between the

Measuring Motion Review Chapter 1 Section 1 - . 1. what is a reference point?. a. a measurement for speed b. a

Cells and Heredity: Chapter 1 Section1 - . learning targets: 1. i can explain how living things are different from

Chapter 1- Section 1 Early Humans - . 1. how did paleolithic people adapt to their environment and use tools to help them

Chapter 1 Section 2: The Beginning of Agriculture - . main idea the development of agriculture was a major turning point