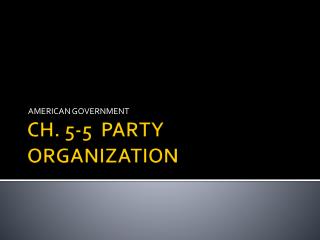 AMERICAN GOVERNMENT. CH. 5-5 PARTY ORGANIZATION. THE DECENTRALIZED NATURE OF THE PARTIES. Major parties are often described as highly organized, close-knit, well-disciplined groups They are not.

Organization of the Democratic Party - . precincts: the grassroots of the democratic party!. your support team. doug

Make It a Party - . host your retirement party at the oaks health club . we do the work you enjoy the moment . two-hour

By Jamie Ficchi - The boston tea party by jamie ficchi objectives : by the end of this lesson students will be able to:

The Role of the Board in Related Party Transactions - Jospeh a. mccahery university of amsterdam 2006 oecd policy

Topdanmark &amp; TopPro – in Denmark - . agenda. denmark the country in an overall perspective – a quick

Demography of Russia and the Former Soviet Union - . lecture 4 sociology soci 20182. sources of data about population.