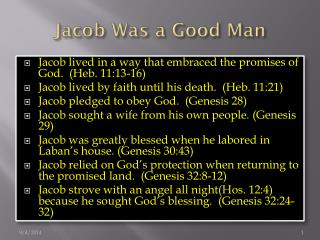 Jacob Was a Good Man Jacob Was a Good Man

Background to Genesis 28 Jacob - . grandson of abraham to whom god promised: i will make you a great nation all the

The Story of Jacob and his Wives Leah and Rachel - . the role of women in the old

Jacob - . story line. twin sons, esau and jacob, were born to isaac and rebekah. esau, the firstborn, sold his birthright

How can you know if a certain action is pleasing to God or not? - “therefore we make it our aim, whether present or

Jacob and Laban - . when jacob was approaching haran (where his uncle laban lived), he saw a beautiful woman at a well

ESAU AND JACOB (the prequel) - . “once when jacob was cooking stew, esau came in from the field, and he was exhausted.