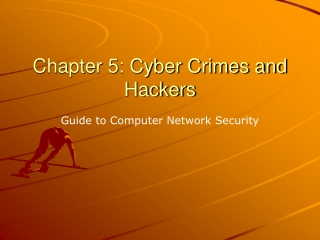 Chapter 11 Crimes of Violence - . chapter summary. chapter eleven is an overview of the most prominent violent crimes in

Crimes Against the Person - . agenda march 13, 2013. today’s topics introduction to criminal law state of mind vs.

Chapter 6 Criminal Law and Cyber Crime - . learning objectives. what two elements normally must exist before a person can

Crimes Against the Person - . agenda march 19, 2013. today’s topics taking care of each other crimes against the person

Cyber Crimes - . cyber crimes. indicate that the crimes are committed through the use of technology. also known as:

Chapter 6: Criminal Law and Cyber Crime - . learning objectives. what two elements must exist before a person can be held

Hackers/Identity Theft - . by: chris and christian . define what is meant by your cyber safety topic. hackers/identity

CYBER CHALLENGES THE ISRAELI POTENTIAL 11 SEPTEMBER 2012 - . erez kreiner kr.erez@gmail.com. what is happening all over

BOTNETS/Cyber Criminals - . how do we stop cyber criminals. words you should know!. zombie computers- is a computer