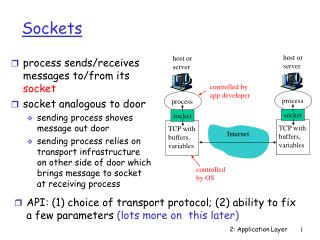 Sockets - . the building blocks of internet communications. motivation. we need to present programs with an abstraction

Sockets - . objectives of this session. describe the concept of socket describe and demonstrate the

Sockets - . intro to network programming. before the internet. early computers were entirely isolated no internet no

Sockets - . clients and servers. computers can communicate with one another in many ways the best approach is the

Sockets - . sockets. mail, ftp, telnet, all examples of services provided by computers on the network. typically, each

Sockets - . chapter 10 from the book: inter-process communications in linux: the nooks &amp; crannies by john shapley

Sockets - . defined as an “endpoint for communication.” concatenation of ip address + port. used for server-client

Sockets - A socket is an object that encapsulates a tcp/ip connection there is a socket on both ends of a connection, the

Sockets - . socket api. tcp/ip model. tcp/ip. tcp/ip does not include an api definition. there are a variety of apis for