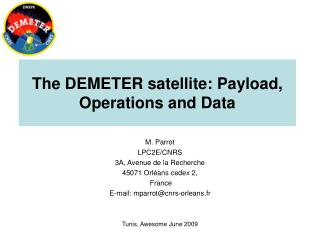 Satellite Communication - . www.123seminarsonly.com. satellite. a satellite is an object that orbits another object

Morgue Operations in Mass Fatality Incidents - . what is a mass fatality event what is your prime federal resource

INTRODUCTION TO OPERATIONS MANAGEMENT - . operations manage ment. what is operations? the part of a business organization