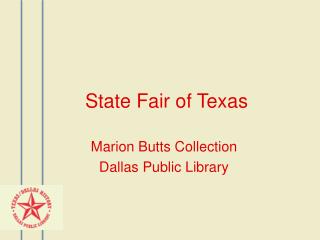 Lyndon Baines Johnson chapter 22 - . “when i was young, poverty was so common that we didn't know it had a name.”

Indigent Defense in Texas: A Look Back and a Look Ahead - . sen. rodney ellis. looking back. 10 th anniversary of the fda

Day 3 - . the mexican constitution of 1824 c-notes. warm-up. i fully hoped to have found texas at peace and in

S.T.E.M. Fair Science Technology Engineering and Mathematics - . by: denise mcilwaine. what to expect. where to begin