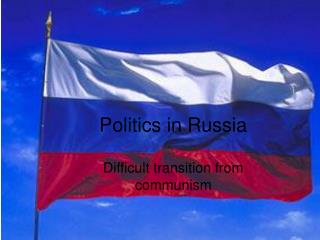 Politics in Russia. Difficult transition from communism. Largest country in the world. Russian population. 14 1,377,752 (July 2007 estimate) comparison larger than that of Japan (127 million) smaller than that of US (301 million) 82% Russian largest minority: Tatars 4% 72% Orthodox