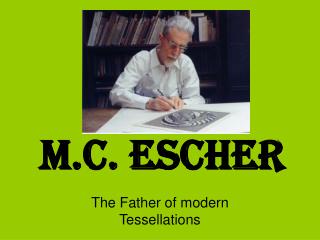 M.C. Escher. The Father of modern Tessellations. Who is M.C. Escher?. Escher was born in Leeuwarden in Holland on June 17th, 1898. He was the youngest of 4 brothers. He is usually referred to by his initials which stand for Maurits, Cornelis. His family called him Mauk.

Maurits Cornelis Escher - . work of art tessellations. life and work of m.c. escher. born in 1898 in holland a son of a

Art and Advertising - . swbat: explore the art based career of advertising, and create a design for a product using art

Tessellation - . a tessellation is created when a shape is repeated over and over again covering a plane without any gaps

Numeracy - . thursday 7 th february. does numeracy matter?. in 1997 the basic skills agency stated that: “against

Square Limit by M.C. Escher - . how are the fish in the middle of the design and the surrounding fish alike? how are they

The Work of Maurits Cornelis (M.C.) Escher - Presented by: tiana taylor tonja hudson cheryll crowe “for me it remains

M.C. Escher - . “i believe that producing pictures, as i do, is almost solely a question of wanting so very much to do