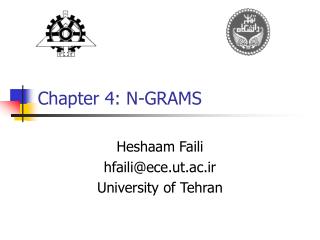 Chapter 4: N-GRAMS. Heshaam Faili hfaili@ece.ut.ac.ir University of Tehran. N-Gram. But it must be recognized that the notion “probability of a sentence” is an entirely useless one, under any known interpretation of this term. Noam Chomsky (1969, p. 57) Chapter 9 Other Peripherals - The complete a+ guide to pc repair 5/e. chapter 9 other peripherals. chapter objectives.