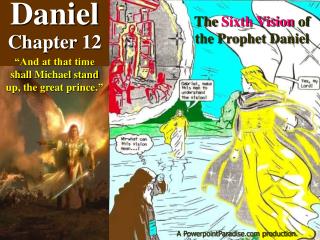 Daniel Chapter 12. The Sixth Vision of the Prophet Daniel. “And at that time shall Michael stand up, the great prince .”. A PowerpointParadise.com production. Introduction to chapter 12 . In Chapter 12, 6th verse, One asks the question:

Daniel 12:4 - But you, daniel, shut up the words and seal the book, until the time of the end. many shall run to and

DANIEL CHAPTER TWO - . nebachadnezzar’s first dream “a view of the future?. read: daniel 2:1-6. 1 in the second