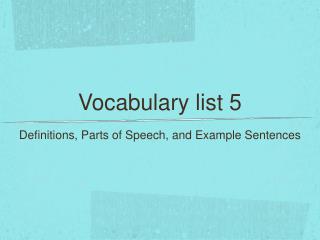 Vocabulary list 5. Definitions, Parts of Speech, and Example Sentences. To Garble (verb). DEF: to reproduce something in a confused and distorted way. RELATED PARTS OF SPEECH: Garbled, adjective Garble, noun Healthy and junk food - . the aims of the lesson:. to revise vocabulary and grammar material develop reading &amp; Vocabulary - On next page of texas chronicle, explain the following vocabulary terms. for each term you will need to

How Night Came to the Sea - . comprehension and vocabulary . vocabulary. the diamond ring gleamed on the queen’s hand.

Vocabulary List 9 - True grit 3. vocabulary list 9. beau. bess married one of the two beaus , and he turned out to be