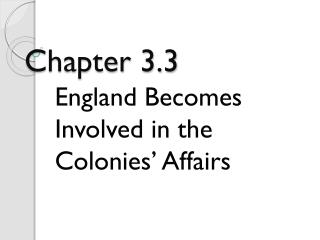 Chapter 3.3 - . families of elements. how are elements classified?. - elements are classified as metals or nonmetals

Chapter 3: Section 3.3 - . deception and fraud. deception . fraud. when a sales tactic is questionable or unethical, but

Chapter 3.3 Slopes of Lines - . objective: be able to calculate slope of line and determine if lines are parallel,

Chapter 3.3 CPCTC and Circles - . megan o’donnell 9 5/30/08. objectives. after studying this section you will be able

Ecology Chapter 3.1 to 3.3 - . what is ecology?. ecology – the study of interactions among organisms and between

3.3 - Step 1 arrange the data in order from lowest to highest. step 2 find the median of the data values. this is the

3.3 - Relationship between first derivative, second derivative and the shape of a graph. 3.3. what does f  say

3.3 - . systems of inequalities. you can solve a system of linear inequalities by graphing. every point in the region of