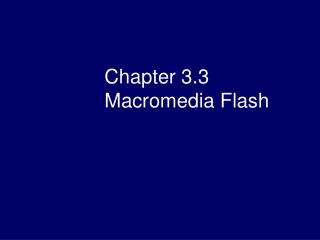 Chapter 3.3 Macromedia Flash. Overview. Flash is one of the leading web game development platforms Flash MX 2004 ActionScript has all the power and strength of most professional (non-web) programming languages. Advantages of Flash. Wide Audience 98% of web viewers have the Flash player Interactive Activities in Music Using Macromedia Flash Streaming Audio and Video in Blackboard - What is flash?. term is

Introduction to Macromedia Flash - . adobe. kevin mcmanus. we are going to look at. what is flash an ide to create