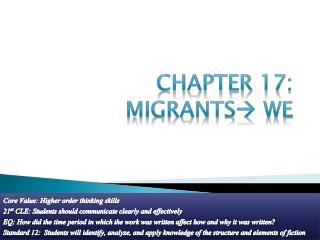 Second Generation Migrants and the Acculturation Process: - . an exploration of cultural identity, language use and

Give us the money! Delay in claims for SNCBs by EU migrants - . martin williams january 2012. delays faced by eu migrants

Economic migrants: A case study of short term population flow - . poland to the united kingdom. why, since 2004, has

Migration and Migrants and Child Poverty in London - . jill rutter. who are migrants?. 35% of london’s population is

Migrants and Economic Performance in the EU15: - 1. their allocations across countries, industries and job types 2.

Why Education Matters for Children of Non-EU Migrants and for Ireland’s Future? - .   presentation for the migrant