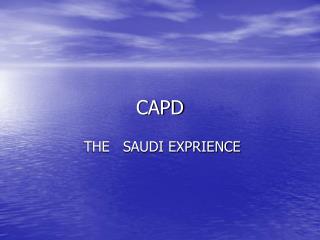 Central Auditory Processing Disorders (CAPD) - . walk a mile in their shoes. can you figure out these familiar sayings?

Acute Renal Failure - . at the end of this self study the participant will: differentiate between pre, intra and post

Improving outcomes for children with Central Auditory Processing Disorder - . what are the indicators a child may have an

Peritoneal Dialysis - . kidney a&amp;p. i.  kidneys a. location - back of the abdominal cavity. the right kidney is