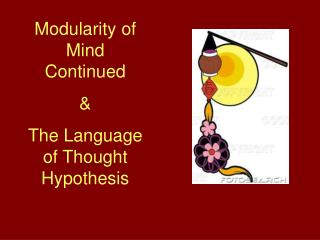 Modularity of Mind Continued & The Language of Thought Hypothesis Modularity of Mind Continued & The Language of Thought Hypothesis

Cognitive Computing Market: Natural language processing had 44% of total revenue in 2014 - To get sample brochure now@

Modularity and Community Structure in Networks* - . final project *based on a paper by m.e.j newman in pnas 2006.

CS4705 Natural Language Processing Fall 2009 - . what will we study in this course?. how can machines recognize and

Linguistic relativity - . a.k.a. “whorfian hypothesis” that different languages shape different perceptions of the