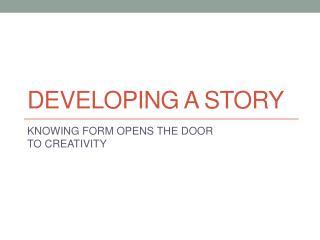 Let me tell you a story… - . it is the story of two heroes. it is a story of high finance. wheeling and dealing. it is

Elements of Story - . review. what makes a good story?. every story, whether truth or fiction contains literary elements.

Developing an NMD Mindset… - . and going from stagnant to stellar. disclaimer!. story starts at qnmd…june 2011 over 3

Elements of a story and the story plotline diagram - . how the author builds the tale. setting of the story. two

Our Small Library Story - . the madigan library has 1 librarian in charge of digital initiatives and 2 ft virtual

Story Patterns Continue… - . look back through your notes on story types. which type of story is “a christmas

How to Tell The Big Story - . by cindy wiles. what is the big story? the big story is god’s story. as followers of

The Story Finding Your Story in God’s Story “Jesus the Son of God” - . subtitled – “who do you think you

“REVERSAL” based on a true story - . “reversal &quot; begins by developing the relationship between seven-year

The Process of Developing Performance Assessments - . the story of the drunkard’s search. why are you looking in the

Margaret’s story - . margaret was a chemistry mchem undergraduate student at the university of leeds. she was

Identifying opportunities in developing markets - . karthik rao may 2, 2013. where is the growth coming from?. developing