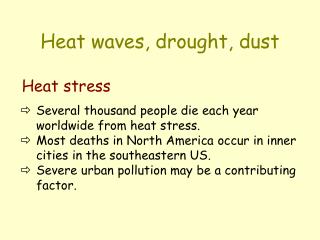 European heat waves: the propagation of Mediterranean drought - . fabio d’andrea. toulon 9.10.2007. with thanks to :

Chapter 1- Drought and dust storm - . chapter 1 quotes. “the surface of the earth crusted, a thin hard crust, and as

Constellation of Central Characters in “Heat and Dust” - . the begum. the nawab. douglas. 1920s. sandy. olivia.

Dust To Dust - . “then shall the dust return to the earth as it was: and the spirit shall return unto god who gave