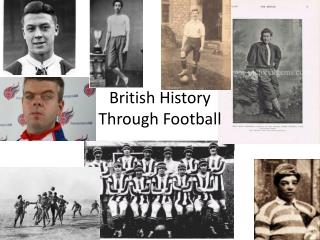 British History Through Football. Diversity through football. Billy Meredith football hero 1874-1958. Billy Meredith second row, first player on left. William “Billy” Meredith was a Welsh footballer. He was one of the early superstars and 1904 was voted the most popular player in football.

The Origins of Football - . football’s beginnings. the origin of football can be found in every corner of geography and

Soccer in America - . by: peter hopkins. what is soccer?. soccer is considered to be the most popular sport in the

The Origins of Football - . sepp blatter, president of fifa. “we honor the chinese people for their country’s role as

Where and how do most British people choose to spend their spare time? Why? - . by yu zhijie and xie aiyi. generally the

RUSSIAN FOOTBALL PLAYERS IN ENGLAND - . english premier league. the history of football began in the era before christ.

History - . black men and women: part of british history. mary secole. mary was born in 1805, on the caribbean island of

BRITAIN AND THE BRITISH - . quiz. 1. the capital of northern ireland is. dublin cardiff belfast. 2. the british flag is

History of England - . by aurora migani . origin of britain . the first population of england was... celts. in prehistory