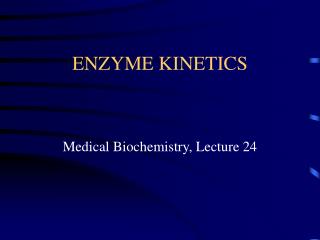 Chap. 6A Enzymes - . introduction to enzymes how enzymes work enzyme kinetics as an approach to understanding mechanism

Inhibited Enzyme Kinetics - . inhibitors may bind to enzyme and reduce their activity. enzyme inhibition may be

Enzyme Assay - . why and how??. introduction. in most cases, actual molar enzyme concentration is not known. we measure