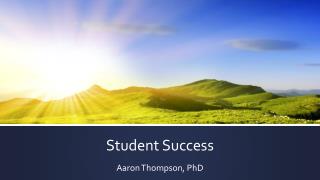 Student Success - . introduction. at lcc we want you be academically successful and this usually means doing well in the

Student Success - . whose responsiblity is it? what faculty don't know or understand. gayle fenton, special assistant to

Student Success/Student Retention Committee - . retention is everyone’s job. first some key terms-there will be a test