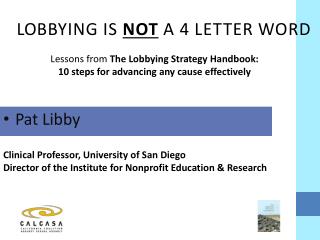 LO BBYING IS NOT A 4 LETTER WORD. Lessons from The Lobbying Strategy Handbook: 10 steps for advancing any cause effectively. Pat Libby. Clinical Professor , University of San Diego Director of the Institute for Nonprofit Education & Research. Your Libby Boxes - Replace the text labels of these boxes with your own underlying constructs, proxy measures, and

How to survive Libby  - . grading procedures. grades are based on a total points system. the broward county grading

PAT MAYHEW - . development of monitoring instruments for judicial and law enforcement institutions in the western

pat mackaronis - Patrick mackaronis is a leading entrepreneur. he is now one of the pioneers in the utilization of