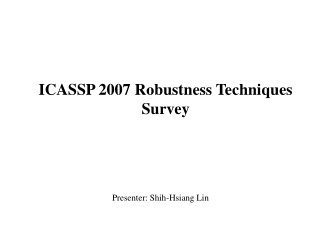 SURVEY INTERVIEWING TECHNIQUES - . methods that use large sample sizes and create results that can be projected to the

Robustness - . the ability of a system to perform consistently under a variety of conditions. elements of robustness:.

Basic Survey Design Techniques - . objectives. to gain an overall understanding of the survey cycle. to understand the