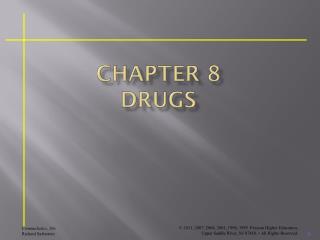 Chapter 8 DRUGS. Introduction. A drug can be defined as a natural or synthetic substance that is used to produce physiological or psychological effects in humans or other higher order animals. Drugs - . drugs. the actions of drugs scientists discovered certain substances that can help you feel better… why talk

Administering Medications - . chapter 8 drugs for the eye and ear. learning outcomes after studying this chapter, you

Anthelmintics Or ‘Why I like drugs” - . nick sangster faculty of veterinary science university of sydney. worms.