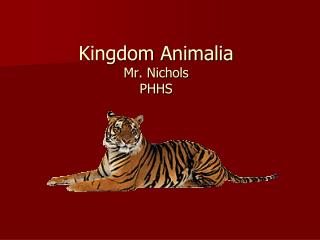 EVOLUTION &amp; SPECIATION Mr.Nichols PHHS - . quiz time!!!!. 1.) what is evolution and how does it explain natural

Overview: Welcome to Your Kingdom - . the animal kingdom extends far beyond humans and other animals we may encounter 1.3

Phylum within Kingdom Animalia - . prorifera. multicellular with little or no tissue organization. no segmentation no

Ch 10 The Kingdom of Kush - . introduction the egyptianization of kush kush conquers egypt the kush capital of meroe kush

Kingdom Protista - . chapter 20. what is a protist? any organism that is not a plant, animal, fungus, or prokaryote.

Kingdom Animalia - . kingdom animalia. there are 35 different phylum within the animal kingdom each phylum shares unique

KINGDOM OF KUSH - . by: awab hassan mohammed hassan mohammmed gabir . location of kush. stretched from south of egypt to

Welcome to the Kingdom of - . in this lesson the student will learn how the different animal lived. and how they survive,