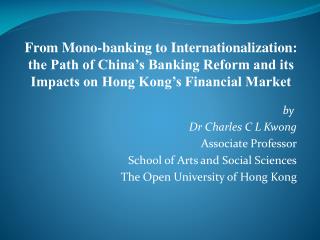 From Mono-banking to Internationalization: the Path of China’s Banking Reform and its Impacts on Hong Kong’s Financial Market. by  Dr Charles C L Kwong Associate Professor School of Arts and Social Sciences The Open University of Hong Kong. 1. The presentation aims at.

My Past Experience in Mathematics - . shing-tung yau. the chinese university of hong kong sep. 19, 2003. i grew up in the

Climate change - Change in mean nighttime temperature from urban to rural areas in hong kong ... the warming at the hong