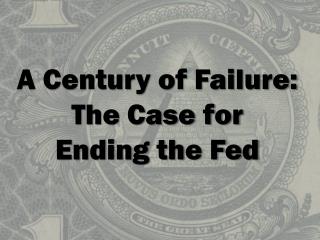 A Century of Failure: The Case for Ending the Fed

A Century of Failure: The Case for Ending the Fed - PowerPoint PPT Presentation A Century of Failure: The Case for Ending the Fed

The Progressive Era - . us history mr. basich. section 1: objectives. by the end of this lesson, i will be able to: 1.

You’ve been WARNED…. - You’ve been warned…. everyday occurrences that landed your colleagues with a warning

What Caused the Financial Crisis of 2008? A Story of Adverse Incentives - . february 24, 2012 teaching financial crises

Monetary Policy - . topic 5. what is monetary policy?. general definition : a tool used by governments to affect the

The Great Depression - . grade 6. essential understanding/ learning objective:. the great depression was a period in time

How far can a Central Bank act as a Lender of Last Resort - Independently of treasury (ministry of finance) support? by

The Federal Reserve System: History and Structure - . in plain english. the federal reserve system. who’s in charge of

The Underground Railroad - . people and places of the journey. nicole styer 5 th grade history. slavery in