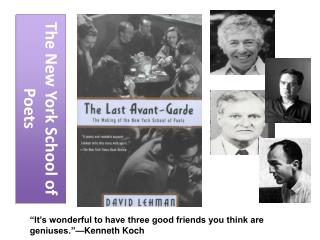 The New York School of Poets

The New York School of Poets. “It’s wonderful to have three good friends you think are geniuses.”—Kenneth Koch. From poetry.org

The New York School of Poets

The Great Russian poets - . “in russia the poet is more than a poet” evgeniy evtushenko. the golden age. the silver

Essentials of Children’s Literature 3 Poetry and Plays - . contents: section one: poetry poetry in the classroom choral

ROBERT Frost and His Poetry - . by: anooj patel “no poet is more emblematically american than robert frost”(thompson,

How do poets use rhythm to impact the feeling of their writing? - . in this lesson you will learn how rhythm adds to a

Famous Poets - . by: brittany case . audience. the students participating in this project will be in grades 6-8 in a

New York's floating forest - Aboard the swale, a floating barge planted with fruit, vegetables and trees on the east