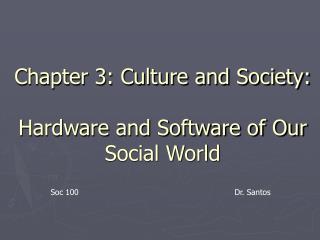 Chapter 3: Culture and Society: Hardware and Software of Our Social World

Chapter 3: Culture and Society: Hardware and Software of Our Social World

(Q. 2) How do we organize society? - Hinduism class and caste karma &amp; moksha the 4 paths of salvation the 3 debts

Tuscarawas Arts and Culture - . who are these creative folks and where do they come from?. we are an artistic community!.

Groups Within Society - . where do you fit in society?. groups within society. a society is not only a group…it is a

The Ideal Society - . government. this government is communistic style. rulers choose their own successors. they are in

Chapter 8: Web Server Hardware and Software - . objectives. in this chapter, you will learn about: web server basics