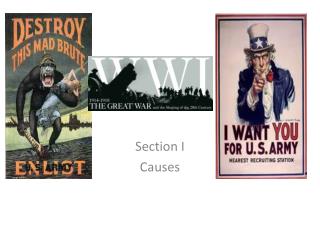 Section I Causes - . the causes of ww1. m ilitarism a lliances i mperialism n ationalism. militarism 1. germany was

I. Causes - The panic of 1837. i. causes. a. the government sold millions of acres of land in the west. b. speculators

Section I - . complexity-entropy planes for full datasets. the ch plane. figure 1: ssx points are averages over 12

SECTION I - . introduction. this page intentionally left blank. introductions. recognition of the review committee and

Section I - . corrections past and present. chapter 1. history of corrections. objectives. grasp why the concept of

Section 12.1 – The Causes of Weather - . 8 th grade earth and space science class notes. what is meteorology?. study of