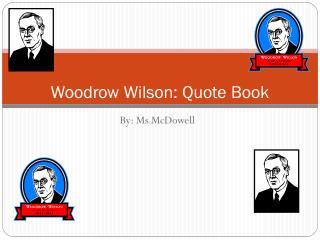 Woodrow Wilson: Quote Book. By: Ms McDowell. Leader Comes To Power. #1: “A great industrial Nation is controlled by its system of credit. Our system of credit is concentrated. The growth of the Nation and all our activities are in the hands of a few men. ...” Where the Red Fern Grows - . by wilson rawls. background information. who was wilson rawls?. born in 1913 “woodrow

AT THE BELL ! - . introduction. each day you will have a quote in which you will need to explain your thoughts on. also

World War I - . review. nickname of american soldiers in wwi. what are doughboys?. president of the u.s. during wwi. who

WHII.10: World War I - . objectives. p. 091. whii.10 the student will demonstrate knowledge of the worldwide impact of