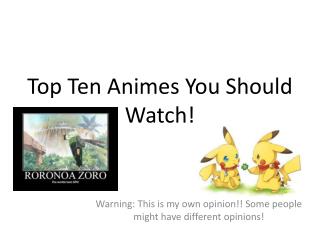 Top Ten Animes You Should Watch! Top Ten Animes You Should Watch!. Warning: This is my own opinion!! Some people might have different opinions!. # 10- Fullmetal Alchemist.

Top Ten Animes You Should Watch!

Dive Watches For Men - Try this site https://www.swiss-watch-retail.com/ for more information on dive watches for men.

AP Review for Unit 6-10 - . review: watch the video and tell me what was wrong with this research?. research methods.

Warm Up - . get out hw copy down hw after quiz pick up the article off of the overhead

http://www.youtube.com/watch?v=U53XWlGK4hY - . chapter 1. introduction to psychology and methods of research. module 1.1.

download Latest Punjabi mp3 Songs 2018 - Looking for top artists and their latest tracks? worry not. we are here to

What is a TED-Ed Club?? - . ted-ed clubs is a ﬂexible, school-based program that supports students in discussing,