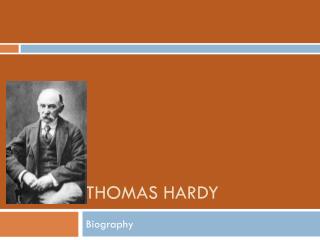 THOMAS HARDY. Biography. Childhood Home. Hardy lived from 1840 to 1928. He was born in this Dorset cottage in the south west of England. It was built by his grandfather in 1800. A description of the property is set out in Domiclium and is his oldest surviving poem.

The Genetic Analysis of Populations and How They Evolve - . outline of chapter 20. the hardy-weinberg law a model for

VINES … An Underutilized Source of Color and Interest in the Landscape - . alan shapiro grandiflora march 31, 2005.

The Man He Killed - . thomas hardy. background on