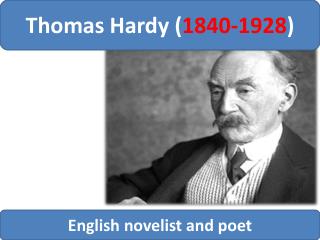 Thomas Hardy ( 1840-1928 ). English novelist and poet. Family Background. His father Thomas (d.1892) worked as a stonemason and local builder . His mother Jemima (d.1904) was well-read . She educated Thomas until he went to his first school at Bockhampton at age eight.

The World Is Flat by Thomas L. Friedman - . destination-india. christopher columbus went to “india” and discovered

Raman Spectroscopy - . 1923 – inelastic light scattering is predicted by a. smekel 1928 – landsberg and mandelstam

Leviathan - Thomas hobbes thomas hobbes (1588-1769) son of a priest (who had to flee) was educated by a wealthy uncle.

Naturalism - . may 4, 2012. definition. naturalism is a literary movement that seeks to replicate a believable everyday

Thomas Kyd - . by chelsi thomas. early life. thomas was born in london in 1558 his father was francis kyd a scrivener and

Naturalism - . definition. a literary movement popular in the 1890s and early 1900s. it had a resurgence of popularity in

THOMAS HARDY - . the hardy cottage in higher bockhampton, dorchester. hardy at the age of 26. hardy’s work as an