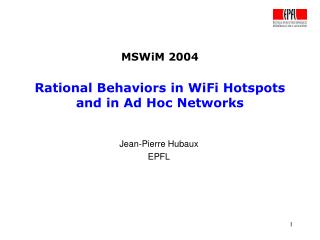 MSWiM 2004 Rational Behaviors in WiFi Hotspots and in Ad Hoc Networks. Jean-Pierre Hubaux EPFL. Cooperation in self-organized wireless networks. D 2. D 1. S 2. S 1. Problem : how to enforce cooperation, if each node is its own authority? Routing in Ad-Hoc Networks - And the dsr protocol. routing in ad-hoc networks. routing overview. we have a network with

Security in Ad Hoc Networks - . what is an ad hoc network? . “…a collection of wireless mobile hosts forming a

Multicasting in Mobile Ad hoc Networks - . by xie jiawei. what is multicast in manet (1). multicasting is the