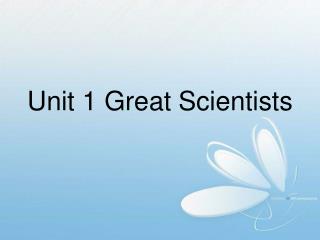 Unit 1 Great Scientists. A great scientist Father of Hybrid Rice The man who puts an end to hunger. Who is he? What is his achievement?. Quiz. 1.Which scientist discovered that objects in water are lifted up by a force that helps them float? Theme 1. Practioner/scientists dilemma - Determining the intervention and research design is an iterative process.

Unit 1 Ch 1 Lesson 3 How Do Scientists Divide Kingdoms into Smaller Groups? - . lesson objectives you will learn: how

Unit 2: Great vacations - . warm- up do you like going on vacations? where would you like to go on your vacation?. c f a

Scientists - . von leeuwenhoek – made a simple microscope hooke – looked at cork under a microscope and named cells

Great Scientists - . insert name. who was it?. born in south dakota, 1901 made vital contributions to atomic bomb

Great Scientists - . std. 7.10.2 i can match great scientists with their theories and inventions. i can discuss the

Scientists - . by alfie and constance. volta. volta’s battery produced a steady current of electricity. volta was one

Scientists - . the atom. democritus . - 400 bc- greek philosopher - no experimenting matter made up of indivisible