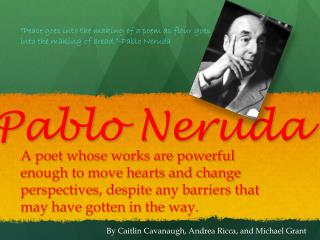 Pablo Neruda - . chile’s most beloved poet. the life and times of pablo neruda. born in parral , chile in 1904, died in

Poetry – Pablo Neruda - . 1. the speaker in this poem may represent, not only neruda, but may also be a persona for all

Pablo Neruda and the Spanish Civil War - . background on the civil war. spawning from nearly 100 years of political