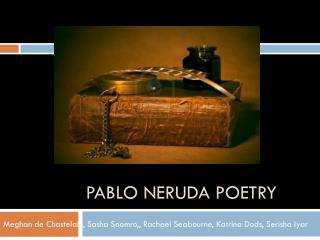 Friendship Day Poems - Friends are a real hero in our life. so on this day of friendship we should dedicate poem to our

Forms of Poetry - . sonnet ballad ode shape haiku limerick. the sonnet. the sonnet was developed in the 14 th century

Great Poets of the World - . a is for maya angelou. poet, playwright and novelist some of her most renowned poetry

Poetry Poems - . by ledarrius blake. color poems. white is the color of the clouds in the sky. the color of a marshmallow

Pablo Neruda and the Spanish Civil War - . background on the civil war. spawning from nearly 100 years of political

The Social and Political T ransformation of Pablo Neruda As Seen I n H is Poetry - . presented by alex titus advisor: dr.

The “Ode” Poem - . we rarely proclaim or praise the people, places, and things that enrich our lives. w.h. auden

The “Ode” Poem - . we rarely proclaim or praise the people, places, and things that enrich our lives. w.h. auden

I Do N ot L ove Y ou E xcept B ecause I L ove Y ou BY Pablo Neruda - . by cindy sebastian,veronica arzola. i do not love

ODES - . modeled after poems written by pablo neruda. what is an ode?. ode (from the ancient greek ὠδή) is a form of