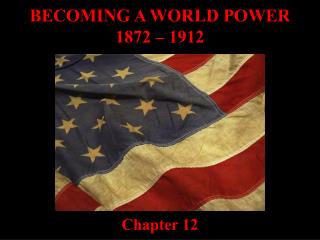 BECOMING A WORLD POWER 1872 – 1912 Chapter 12. What is “ Imperialism ”?. It is when a nation builds an empire by gaining political control over other countries. Chapter 15 – Nations: Borders and Power - In this chapter, you will learn about political power – the power to

Studying the Progressive Era Through the Election of 1912 - . the election that shaped the course of the 20 th century.

Chapter 1 - . the science of biology. what is science?. science -an organized way of using evidence to learn about the

CHAPTER EIGHT: HOW WE SEE THE WORLD - . we see the lines as different because we have been &quot;taught&quot; to