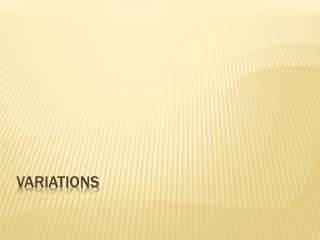 Joint and Combined Variation - . review of variations. joint variation. the variable y is said to vary jointly as x and z

Graphing Inverse Variations - . a relationship that can be written in the form y = k/x , where k is a nonzero constant

Chromosomal Variations - . this presentation will look at alterations in chromosome number and specific syndromes that