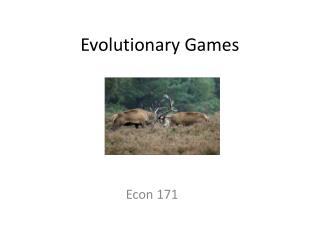 Evolutionary Games. Econ 171. The Hawk-Dove Game. Animals meet encounter each other in the woods and must decide how to share a resource. There are two possible strategies. Hawk: Demand the entire resource and be prepared to fight for it. Dove: Be willing to share or retreat. 10: Evolutionary Games - Evolutionary games what if individuals aren’t as smart and calculating as we have assumed so

The Evolutionary Games We Play - . psychology 3107. introduction. animals tend to behave in ways that maximize their

Evolutionary - . classify this. get &quot;specie&quot;fic. feel the flow. success!. populations and more.

Evolutionary Basics - . what was the view of the world and nature before darwin?. static universe the universe didn ’

Evolutionary Theory - . proposition 1: not a theory of strategy by: mahua guha elena vidal.

Evolutionary Computing - . consider the spectacular results of biological evolution designs better than any other known

Evolutionary Genetics - . evolutionary genetics. what are genes, and how do they produce the traits that make a pea plant