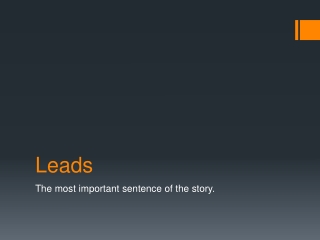 Leads. The most important sentence of the story. Attracting readers. Readers enter a sea of text from a boatload of sources. Books, magazines, newsletters, newspapers and notes. Websites, social media, texts. Billboards, flyers, store promotions and junk mail. Why read your story?.