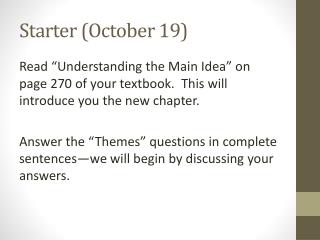 Starter (October 19). Read “Understanding the Main Idea” on page 270 of your textbook. This will introduce you the new chapter. Answer the “Themes” questions in complete sentences—we will begin by discussing your answers. A New Civilization in Western Europe. Chapter 11

All Summer in a Day PLOT Cartoon - . create six frames (squares). label each frame with a part of the plot

October 2012 - . objective : to be able to find the nth term of an arithmetic sequence. skills : absorption and making

Weimar Germany 1919 - 1929 - . political problems of the weimar republic. starter: can you identify these political