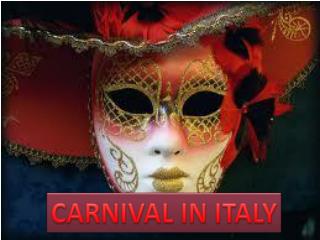 CARNIVAL IN ITALY. Carnevale , also known as carnival or mardi gras , is celebrated in Italy and many places around the world 40 days before Easter, a final party before Ash Wednesday and the restrictions of Lent. Come to the Carnival !. Venice.

Italy - . by jack ella merritt. where is italy?. italy is on the continent of europe. in napoli mt. vesuvius which is a

ITALY - . by : rory o’herlihy. where is italy ?. italy is right next to croatia and france italy is here !. map of

Italy - . by: kaelee fay &amp; robin cooper. italy. italy has many sites and is a very popular tourist site. italy

Patras Carnival - . we translated this song for you! nefeli and maria. patras carnival you make us crazy every time and

Carnival - . what is carnival?. it is an annual celebration of life found in many countries of the world. . where did the

“The dead also can follow the mas bands on the Carnival parades...” “The Carnival mas bands are not only followed

Mediterranean Cruise with Palmary in Carnival Magic - . cruising the most beautiful cities in europe!. carnival magic