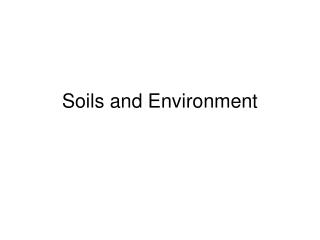 GEOL 340 Environmental Soil Science - . “soils and land use”. i. introduction a. what is pedology? from greek:

Soils Investigation - . why test the soil?. buildings are supported by soil engineering properties of soil are highly

Soils - . what is soil?. thin layer on the earth’s surface that is made by the interaction of five factors: rocks,

Characterizing the Physical Environment - . focus is local, not global or regional . what are the site properties? what

Natural Resources, the Environment and Agriculture - . chapter 10. topics of discussion. agriculture and the environment

Soils - . plant material maintenance. soil. soil is the top layer of the earth’s crust . millions of years to make