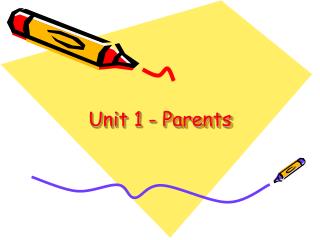 Unit 1 - Parents. Part A. Pre-listening Task. Go through the discussion questions quickly as a whole class. Read aloud the sentences and structures in the Language Focus part. Part B. Dating with My Mother. Language and Culture Notes: Unit 2: Parents and Families - . prepared by: cicilia evi graddiplsc ., m.psi. parents …. used to be blame for ld in

Inquiry A PYP unit for Parents